Overheard in the bubble bath tonight:

Little Philip:
Daddy, I know the difference between boys and girls.

Little Philip:
Yes, boys are handsome, and girls are pretty.
Posted by Mosshouse at 8:14 PM 1 comment: 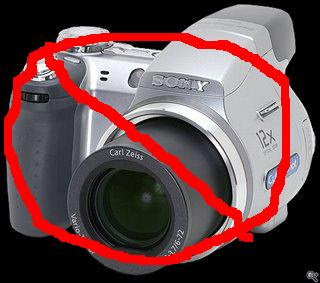 While filming Little Philip's Lessons and Carols service at his school the shutter button came off our camera. I was devastated, knowing that we would be without a camera this Christmas, Helen's first Christmas! We are glad we bought the extended warranty on the camera so the repair is free but it will take as much as six weeks. We will have to rely on other family members to help us capture those special memories this year. Little Philip will be attempting to capture memories in the art medium of fingerpaint. Stay tuned....

Once a week, sometimes more, I am faced with this. 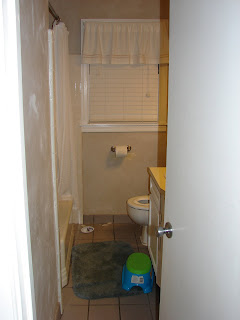 It is the doorway to filth, filth that must be eradicated. Now that we are potty training, I am feeling compelled to increase the weekly cleansing ritual because of this. 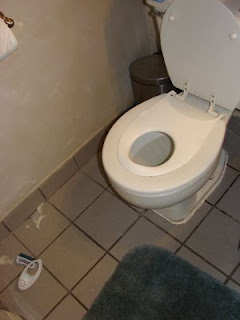 Having grown up with all girls, I had no idea about boys in the bathroom and how often they miss, especially when they are three and are so easily distracted. And since I am more concerned about the cleanliness of the actual body parts of the family, there is this to clean as well. 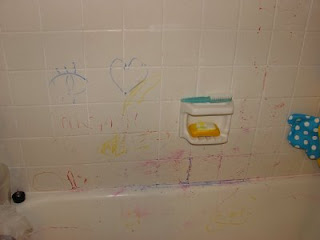 While talking to a friend today I told her that the tub currently resembled a crime scene. She suggested that a few M&Ms had been the victims of a violent crime. I couldn't have put it any better myself. See what I mean? And please notice how thrifty we have become, molding pieces of old soap onto new soap, resulting in a lovely bouquet of yellow deodorant Dial, Ivory, and Lever 2000.

Mr. I-Like-To-Draw-Big-Dark-Lines-All-The-Way-Around-The-Tub is rather fond of grinding the bath crayons deep into the grout line between the tile and tub. It requires the strategic use of an old toothbrush to remove, along with an entire bottle of Soft Scrub. 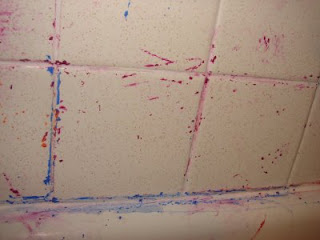 Ah, the joys of keeping the house tidy, or at least attempting it. And then, I see this... 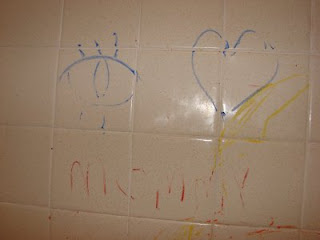 and know it is all worth it.
Posted by Mosshouse at 3:48 PM 2 comments:

Falling Rather than Crawling

While Little Philip was napping this afternoon, Daddy and Helen spent some quality time together. This is good considering Helen screams and pitches a fit if anyone other than Mommy is holding her. So, along with potty training, we are also trying to get over stranger anxiety, and working the ability to be happy in Daddy's arms while Mommy is still within sight. Afterall, it's a small house so staying out of sight is out of the question.

Anyway, I had to catch this sweet moment between Daddy and daughter. It reminded me of being a little girl, sitting on the side of the pool with my Daddy in the water, holding his hands out for me to jump.

Posted by Mosshouse at 5:20 PM No comments:

Potty train up a Child and...

It was in September 2007 that we began the battle that made me seriously question my ability to be a mother, let alone maintain my sanity. We did not plan on trying to potty train that early but Little Philip said he wanted to try. Remember the singing potty? That was ploy number one followed by:

We don't know what did it but Philip has not had an accident since last Thursday. We are speculating that perhaps it was that we are stressing how important it is that Little Philip set a good example to his little sister. We've noticed him trying to show her how to crawl, how to hold a book, how to clap, etc. He really takes his big brother responsibilities seriously and it is so flippin' cute. Daddy recalls mentioning to him that one day he would teach Helen how to use the potty. Could that have been the sticking point we've so longer for now for over a year? Whatever it was, we are super relieved!
Posted by Mosshouse at 9:49 PM 6 comments:

An update on our earlier caption contest. The Fancher family wins! The caption about belly button gas was just too funny not to pass up. Now, we are making fudge but we have also become addicted to a new thing - cake balls. This recipe courtesy of my home girl on the range - The Pioneer Woman who offered this recipe at Halloween. Here are some pictures of this addictive concoction. There are two major ingredients that you simply mix together. A cooked cake and a can of icing. Then you simply dip in chocolate and decorate. Mmmm... I took two pictures to show everyone. For the sake of good marketing, I had to bite into one so you could see the moist delicious chocolate center. Because it was blog related, weight watchers points were not counted in the making of this picture. 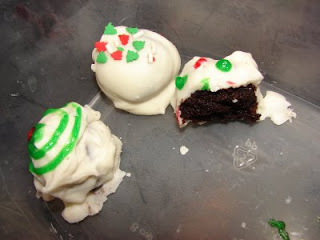 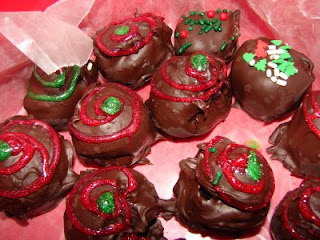 These things are confection crack and I highly recommend them. This is not to say that fudge isn't also oh-so-good but everyone knows what fudge looks like, right? So, Fanchers, your choice - irish cream fudge (with or without nuts, your choice) , or cake balls?

Posted by Mosshouse at 1:41 PM No comments: 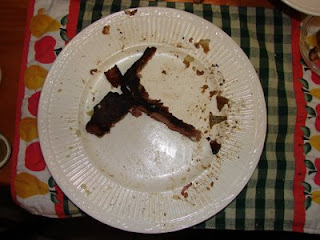 OK, maybe it wasn't the 29th but it waking up to my two beautiful children singing happy birthday to me made me feel much younger! It was a delightful day. I took the kiddos to the zoo since I promised Little Philip that he could ride the train. Helen was enthralled with the lemurs that seemed to be a bit enthralled with us as well. She would suck in air and make this terrible gasping noise that used to make my heart stop until I realized it was her way to squealing with delight. The big bengal tiger walked right up to the window, coming so close that Little Philip ducked behind a partition, worried it would eat him. After feeding the flamingos and black swans, we headed home for lunch and naps. Daddy let Mommy nap for her birthday. A whole hour later, I was refreshed and ready for anything, especially my birthday steak dinner, lovingly prepared by the best grill man in the world, my hubby. I would have taken a picture of the plate with my charcoal fired t-bone with a heavenly spiced rub, nestled next to a loaded baked potato and caesar salad but this beastly animal came in and devoured everything in sight. Oh wait, that was me. Seriously, looking at that bone on the plate, would you even imagine a woman ate that? I'm such a lady.
Posted by Mosshouse at 8:28 PM 1 comment:

A conversation at 7:30 a.m. this morning. Big Philip is making pancakes. He then murmurs under his breath, spelling out a word so that Little Philip will not catch his drift. Mommy walks through the kitchen with Helen to do the smell test for whether or not coffee is brewing yet.

Philip: "Philip, do you want jelly or syrup?"

No answer, as Little Philip slurps his morning milk.

Mama: Quizzically attempting to grasp this difficult concept sounds it out, "Baaaath?"

Brain transplant, please.
Posted by Mosshouse at 7:50 AM 2 comments: