Today is our fifth wedding anniversary. I took the day off to spend with our sweet little boy, Philip, Jr. So far, I've stared at his innocent little face amazed at how much he looks like my husband. I love that. I've also spent the morning thinking back to our crazy courtship and how we got started in our new life together five years ago. It went something like this.

McDee 5/8/00 2:30 PM So you are communicating with your crush... Is it possible that he has a
little crush on you? This sounds very interesting!

Renie 5/8/00 2:32 PM Maybe?! he emailed me before I even got back Macon. He's terrible cute and
quite charming. he went to Miss. State undergrad/grad. I told him we'd have to catch a Titans game together :)
McDee 5/8/00 2:35 PM This sounds awesome! Trust me when I tell you that the long distance thing is
possible. It will keep you from staying in Danville all the time, but also you'll get to know one another via email and phone, take your time and the time you spend together would be extra special. Do NOT count him out because of the distance! He sounds nice!

Renie 5/8/00 2:37 PM Slow down! I just met him once! Maybe this is just a professional contact he is considering! I wish though-he's really adorable.

Philip gave me an early anniversary gift last week. It was all the emails we exchanged during our early courtship that he saved. There were some fun moments to read back through. One in particular noted that the Dean of Student position was open at Birmingham-Southern College in the spring of 2000. I lamented that I was qualified but hoped that BSC would "boot" the new guy/woman in a few years to hire me (no offense to Alex Gresham who was hired after I said that!). My prediction was off by about two years but here we sit, Mr. and Mrs. Philip Moss and family, in Birmingham in the year 2006.

So these are the things I loved about my husband then and still do now:

He is so goofy Philip doesn't care about looking or acting cool in front of the guys. What you see is what you get. He is who he is - open, honest, vulnerable, and silly. I remember thinking, that's going to be a great quality when he is a daddy. I could not have imagined the joy it has brought me watching him interact with his son. I take life way too seriously. Philip keeps that in check.

Spiritually sound and strong. Without sharing my total testimony, suffice it to say that I was somewhat lost when Philip met me. I knew what my faith should be but I was searching for a denomination that would support it. That was a scary decision to make given my family's strong spiritual beliefs that differed from my own. That decision remains the most emotionally challenging decision in my life so far. I remember Philip giving me the Five Points of Calvinism and the Shorter (thankfully) Catechism. The lightbulb simply went off and the wash of peace that came over me I will never forget. There is so much more to this story but in a nutshell, Philip has been my spiritual head and source of encouragement ever since.

His smile. Anyone who knows Philip knows he constantly smiles. Nothing gets him down. He is Forrest Gump. He sees life as a spiritual journey and he has all the confidence and positive attitude to get him through it. I need that because my nature is to be cynical and pessimistic. He reminds me to smile, to stop and pause, to be less anxious.

He eyes. Large, dark brown, and focused. I remember those eyes from the first time we met in the Richmond, VA airport. I remember thinking "great guy, wrong place wrong time." Glad things worked out :)

He wears his heart on his sleeve. He did from day one. My favorite quote was when he brought up the possibility of him looking for a job in Lexington, KY to be closer to me, just weeks after we'd met! When I bristled at the speed of how quickly our relationship was progressing emotionally he shared some thoughts on why he was suggesting such a move and ended it with "I just think you are wonderful." I, with my female defenses up and ready for battle with yet another jerk (I was afterall, a magnet for jerks back then), felt my defenses drop. I melted into a pile of romantic goo. One Moss family reunion at Orange beach in June of 2000 and the rest was history.

There is so much more to Philip that I love but I'm afraid eblogger may have a limit on webspace so I'll stop there. Philip's favorite movie is Forrest Gump. I don't know why Philip persued me. He will say I persued him but technically, he called me first. Once he got to know me, I really don't know why he continued to pursue me. We couldn't have been more opposite. But as our family and friends met each of us, saw us together, people began to say things like "He balances you." And so, we joke that we are like Forrest and Jenny - "peas and carrots."

I thank God for my husband and all the joy that God has brought me through him. I didn't deserve Philip and I still don't. But by God's grace alone, he is my husband and I will cherish him always.
Posted by Mosshouse at 9:31 AM 2 comments:

Little Philip is not walking yet but seriously, it could happen at any moment. Right now he is enamored with opening and closing doors. He shows a terrible temper if you shut any doors. He wants to shut it himself! The only problem is that big head of his. Recently, he was sitting with the edge of the door between his little legs. He was trying to shut it and his head became wedged between the door and the wall. He was terrified and I was laughing so hard I had a hard time extricating him. Does that make me a terrible mother? For the most part, opening and closing doors is a more advanced form of peek-a-boo and "I'm gonna get you!."
Posted by Mosshouse at 10:22 PM No comments: 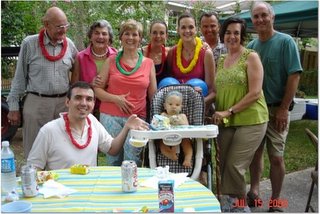 For our friends looking forward to first birthdays, just know that the best icing for a first birthday cake is blue - lots of blue.Our little boy looked like a smurf by the end of eating his little first birthday cake. The rest of us enjoyed the bigger cake, cream cheese frosted of course! Mama Em, Papa Papa, Mamie and "Bop" Moss all came in for the ocassion. Fran and Jason Cooper, The Bekurs, Applebys, Davis's, Hensleys, Sterlings, Cottens, Delks, Duongs, Hugheys, Campbells, Nana Lynette, Julie Stone and Little Will, Aunt Lizzy, Poppy Porter and NeeNee, all joined in the festivities. Sounds like a lot of people? It was, but Little Philip loved it! 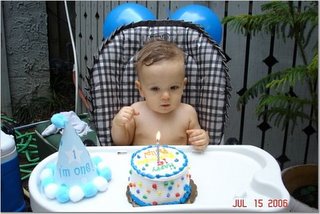 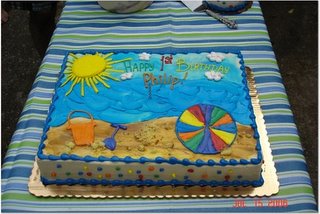 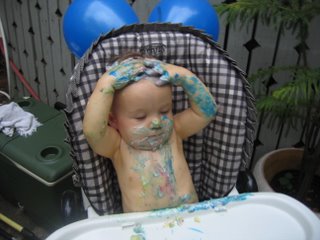 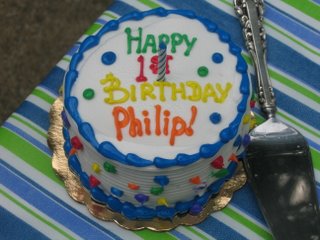 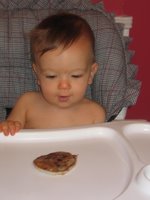 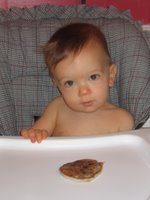 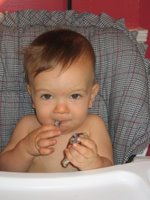 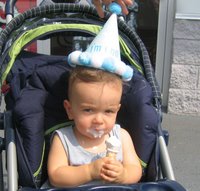 Today is Philips first birthday. One year ago today we were checking into the hospital at 9:00 am only to have to wait until 7:30 pm to get to meet our son. In order to celebrate Big Philip made blueberry pancakes this morning. Then in the afternoon, Philip's friend Max, who shares today as his birthday, joined us for some free birthday ice cream at Brewster's. We really did like the ice cream. The frown is because of the goofy hat Mom made him wear. 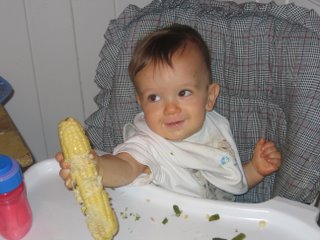 Renie's boss and friend, Dudley, returned from a trip to the beach and had some left over shrimp and corn. Though Lil Philip didn't get any shrimp he loved the corn!
Posted by Mosshouse at 8:39 AM No comments:

Little Philip turns one this Thursday and we are so excited. We have a little slip and slide party planned for Saturday at Poppy and NeeNee Porter's house and Mamie and Big George Moss, along with Mama Em and Papa Papa are coming for the festivities. Mommy ordered Little Philip's cake today, cream cheese frosting of course. It makes for a messier picture! Our twelve month check up is first thing on Friday so we hope to make it through the shots ok again this time. We may take our first step or two before our birthday. Little Philip is standing up on his own for long periods of time and trying to take that first milestone step! We'll keep you posted!
Posted by Mosshouse at 9:42 PM No comments: 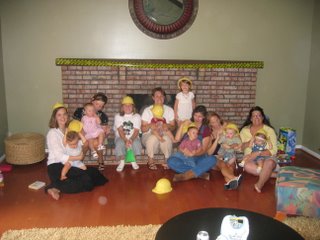 Little Philip attended his very first friend birthday party today. It was for his friend, Max, who shares the same birthday. Max is a little bit older - 3 hours to be exact. His daddy is an engineer and the theme of his party was construction. There were lots of fun orange cones, yellow caution tape, and tonka trucks to play with at the party. At the end, we all posed for pictures with our yellow construction hats. Philip wasn't crazy about the hat.
Posted by Mosshouse at 9:04 PM No comments: 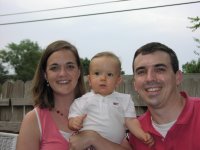 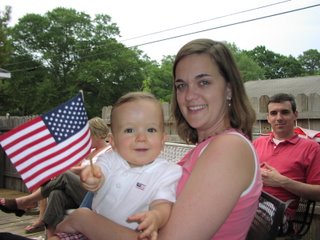 This time last year, Big Philip and I were sitting downtown Homewood, watching the fireworks over Birmingham....and at some point timing what we hoped would be the "real thing" contractions. Alas, we had to wait just a little over a week longer. This year, we tried really hard to keep Little Philip awake for the 9:00 p.m. fireworks again but he was just so tuckered out. We had some friends over for a cookout. Philip's favorite girlfriend is Sadie Bekurs. Don't you think they are photogenic? Sometime around 7:30 p.m., those that still had it in them left for the street party downtown Homewood and to watch the fireworks. We cleaned up, put "little man" down to bed, and smiled at the thought of our happy little family, thanking God for our peace and safety in the good ole USA.
Posted by Mosshouse at 9:26 PM No comments: