Recently, our church announced that a new church pictorial directory was to be produced. We have been attending our church, Mountain Brook Community Church, for over a year now and recently made the decision to formally join. It seemed fitting that we should make every effort to present ourselves as children of God without fault in a warped and crooked generation, Philippians 2:15. Of course, we are full of faults, inside. We are very imperfect, I mean inside and out, and for that reason, desperately need God's saving grace in our lives. And by grace, I mean this mama REALLY needs that grace. For here is story of how our church directory picture might end up on awkwardfamilyphotos.com
Our church directory picture appointment was originally scheduled for, Saturday, April 30th. For anyone who watched national news that weekend, you know that the Birmingham area was devastated by a series of tornadoes on Thursday, April 27th. One of those early morning tornadoes severely damaged our church (see post below) so church pictures were cancelled and rescheduled.
Fast forward to a few weeks ago when Philip and I decided to take the family to our local favorite pizzeria, New York Pizza for dinner. While waiting for our pizza, Helen decided she really wanted a tiger tattoo from the vending machine. Daddy gave in and allowed her to try for it. Instead of a tiger (the tiger propped on a mound of human skulls, by the way), the grim reaper tattoo came out, prompting an all out temper tantrum from Helen who did not understand why she could not be guaranteed the tiger tattoo. At this point I gave in after an exhausting day and walked over to the vending machine, put in two more quarters, said this prayer "Lord, if you will just let the next tattoo be a tiger, it would really help soothe my nerves and make me a patient parent right now and for the rest of this evening." And poof - God was merciful and granted the tiger tattoo.
Once home, Helen and Philip gleefully asked me to put the tattoos on their arms which I did, but not without making it clear that we would have to remove the tattoos prior to our church directory picture three days later. I also removed the mound of human skulls from Helen's tiger tattoo because a tiger by itself as a tattoo is so much classier on a three year old little girl's arm. I decided to let the scythe wielding grim reaper tattoo on Philip's arm remain in its original form. I just couldn't figure out how to remove the gruesome death symbolism from the herald of death himself.
Three days later, five minutes before our church directory picture appointment, I realize I have forgotten the appointment. I toss two kids and a husband in the van, and we make it just in time. And so, charming son in white polo and seersucker pants, beautiful daughter in smocked dress complete with bow in hair, and two smiling parents arrange themselves on the picture stools when to my horror I realize that the children's tattoos are still very visible with no way to hide them. The photographer promises she will digitally remove the tattoos so I remove myself from the ceiling and smile.
Last week the freebie church directory picture was waiting for me in the foyer. To my horror, this is the picture that was enclosed. 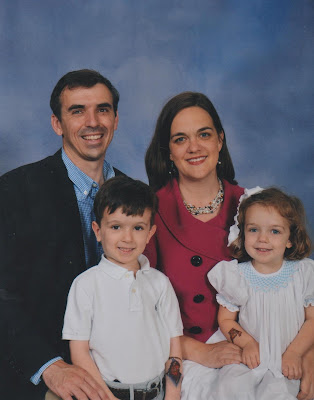 Need a closer look at their arms? 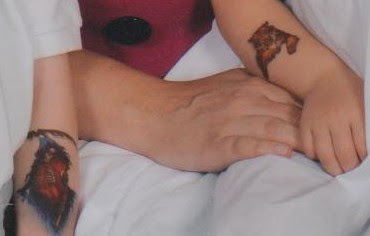 Lovely isn't it? However, it should be noted that a quick phone call to the church office was made. A very friendly photographer who remembered me (who wouldn't!) said she will for sure digitally removed those tattoos prior to the printing of the MBCC church directory.
This might go down as one of my top five parenting failures and more proof of why the Junior League just ain't ready for me.

Posted by Mosshouse at 9:26 PM

sorry but I LOVE it!!!....priceless :) and you guys looked great..sans tatoos!...haha...at least you have your pic, ours is no wher to be found!

Leave it be! Obviously, they're not real tattoos on the kids :) !

Hilarious! And, I love your blog!

This is perfect. I found your blog from facebook. So fun to read!

This is AWESOME. Even though you will have a edited version in the book I hope you will keep this one forever!

I almost cried laughing at this...especially your comment about a straight-up tiger tattoo being so much classier for a three-year old than one with a pile of skulls!